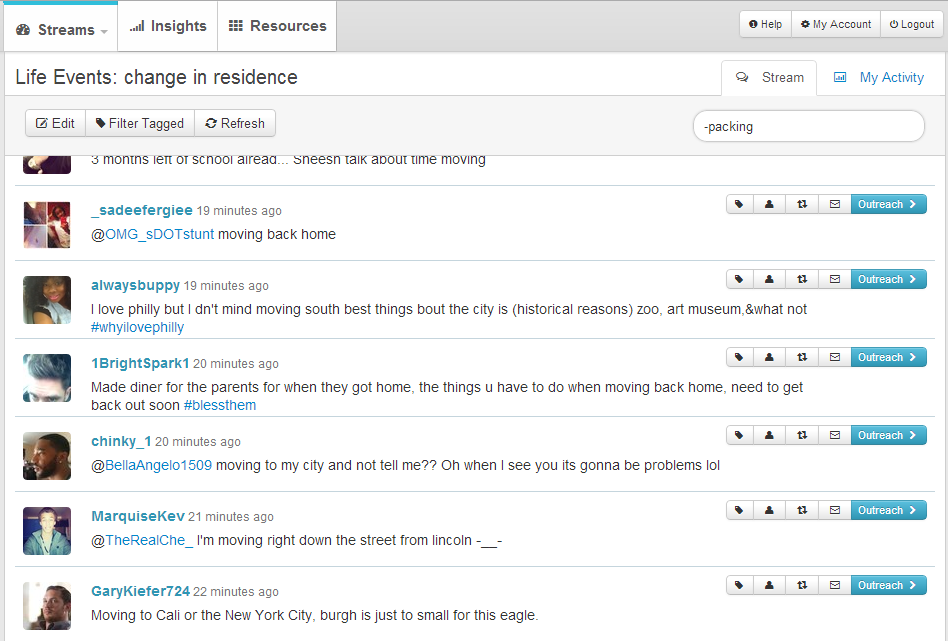 If so, can it be mined for leads and sales like search engine queries can?

For most marketers, purchase intent doesn’t pop into their head when talking about social media. Not a lot of people are buying stuff on Facebook, after all.

But the fact is, actionable purchase intent is expressed in social media tens of millions of times a day.

At my old company, NeedTagger, we knew this is true, because we measured it.

Here are a few examples, with their monthly mention volumes back in 2012: Social Intent is Different than Search

The type of purchase intent expressed in social media is different than the type you see on a search engine in several ways.

First of all, the topics discussed are different.

Really private stuff you might be quite comfortable looking for on Google may not be discussed as often on Twitter.  This includes private matters such as divorce, sexual preference and behavior, and unpopular political and racial biases. That said, it never ceases to amaze me how much private stuff some people are willing to share about their life, friends and family.

Second, the types of expressions people make are different.

This is due to the conversational / public nature of social media.

For example, in social media you’ll see a lot of complaining about an issue, asking for and sharing opinions, brainstorming and commenting, and requesting help on a topic – stuff you don’t typically see in search engine queries.

A third big difference is the variety purchase intent.

There’s a lot of implied intent, for example – this is stuff people say that clearly indicates they are in the market, but they aren’t being that explicit about their buying plans.

For example, “I just tore my anterior ligament” is a pretty good indicator that, “I need an orthopedic specialist”.

Or, “I just got a new job in Phoenix!” is a reliable indicator that this person will be shopping for their next cable or satellite TV provider soon.

to the downright actionable…

Some view these differences as a weakness of social media when it comes to signalling buyer behavior. But I disagree.

While there is some truth that you can’t just tweet and land a sale, social intent presents a unique competitive opportunity for savvy marketers who understand the non-linear nature of online customer behavior today.

You just need a way to isolate the posts that matter and to learn how to engage when it’s appropriate.

Better than Search (in some ways)

In some ways, social purchase intent is actually better than search intent.

For starters, consider that some forms of purchase intent are only expressed in a social environment.

For example, when people “fall out of love” with their phone company, they don’t usually signal it by searching for a competitor.

Instead, they complain in public…

You aren’t going to catch that sort of response in a search engine.

So can you really connect with prospects, generate leads, land new accounts and sell stuff by mining social media for people in need?

For example, Marketo uses Twitter to generate leads at a fraction of the cost of traditional lead gen methods.

Great for Lead Nurturing, Too

Responding to people requesting help or opinions with quality online content is a natural way to guide people in their decision making process.

Copied below is an example of lead nurturing taken from a customer of ours who sells social media management services – note how he’s helping someone solve a technical problem, building goodwill in the process: Using social media in this way, you can reach more people at more engagement points than in other media.

You can also learn a lot about why people like or dislike your offerings, and how people talk about your brand.  Try getting that from a Search Engine.

But perhaps the most important advantage of tapping into this new river of social intent is the fact that most marketers have not learned how to take advantage of it.

A recent survey by Gleanster revealed that the vast majority of Top Performing Marketing organizations are focused on identifying purchase intention in social media.

Yet Gleanster’s report also noted that only 6% of top performing marketers are actually measuring purchase intent in social media.

People, this is what’s known as a “greenfield opportunity”.

TAKEAWAY:  There is a wide river of purchase intent flowing through social media today. How well are you tapping it, to move your leads forward?

This site uses Akismet to reduce spam. Learn how your comment data is processed.

We operate independent media properties and publish 1,000s of pieces of content each year to help global consumers become aware of, learn about, and purchase big-ticket goods & services.

Stuff I Write About